Stepping over bodies to get cash from machines

IN an odd twist to the concept of “full-service banking,” some air-conditioned off-street ATM centers in China have become overnight accommodation for people trying to escape the sultry summer weather.

Pictures of locals and even tourists camped out in the enclosed centers, which are open 24/7, have spread on social media, possibly putting the germ of the idea into more heads.

In one photo taken at an ATM center in the southern city of Guangzhou last month, nearly 30 people were bedded down on mats spread on the floor. A separate posting uploaded on Facebook showed two women having a kip in an ATM center in Hong Kong, with newspapers as rough bedding and suitcases at their feet.

For bank customers who want to use an ATM at night, stepping over a crowd of sleeping people can be annoying. The banks themselves aren’t very happy about the misuse of ATM facilities. Several bankers told Shanghai Daily that they are drawing up plans to ensure that ATM facilities are used only for banking transactions.

“The self-service areas of banks shouldn’t be places for people to linger because that poses a risk to personal and property security,” said Zhen Shiyu, a spokesperson for China Citic Bank.

She told Shanghai Daily of one instance when a bank security guard evicted a homeless man from an enclosed ATM center last winter and found a 20-centimeter-long flick knife among his belongings.

“What if the guard let him stay?” Zhen asked. “What would happen to clients who came to get some money from the ATM? Our bank doesn’t want to take such risks.”

On the other side of the issue, some people sympathize with the squatters out of social concerns. They argue that there are many low-income people who don’t have the money to live in air-conditioned comfort during hot, humid summer nights. They want the banks to show a bit of tolerance and generosity toward society’s less-fortunate.

“I won’t use an ATM if there are people camped out inside,” said Wu Huanyu, a clerk for MasterCard. “It’s not because of the security problem. I simply don’t want to disturb them. Some of them are destitute people more frightened of us than we are of them.”

Sleeping on the street is not a particularly widespread problem in Chinese cities. ATM centers are just one extreme facet.

“How to balance the demands of security against a generous public conscience is a task for every society,” Wu said. 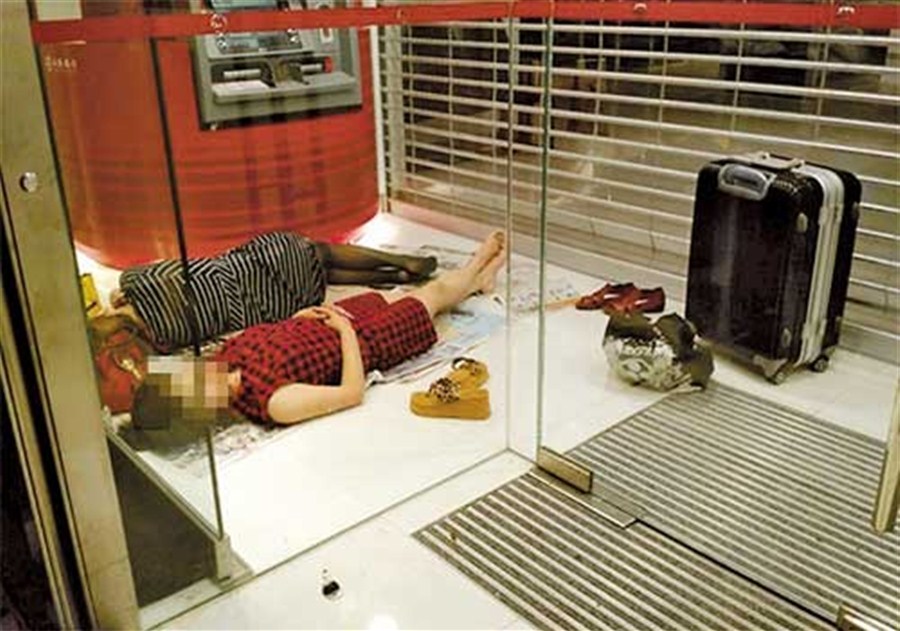