Net income was $771 million, up a whopping 81.8% year over year. However, quarterly earnings per ADR (American Depository Receipt) of 23 cents were well below the Zacks Consensus Estimate of 32 cents.

Total revenue of approximately $13,432 million highlighted an improvement of 4% on a year-over-year basis. Segment-wise, Services revenues were around $11,628 million, up 8.1% year over year. Equipment revenues totaled $1,804 million, down 0.2% year over year.

Total cost and expenses in the second quarter increased 4.4% year over year to $9,696.6 million. Quarterly EBITDA (earnings before interest, tax, depreciation and amortization) improved 13.7% year over year to $3,735.2 million. EBITDA margin was 27.8% compared with 26.1% in the year-ago quarter. 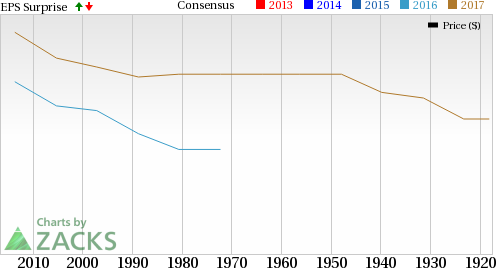 America Movil currently has a Zacks Rank #5 (Strong Sell). The company is facing intense competitive pressure from big telecom operators like Telefonica SA TEF and AT&T Inc. T in Mexico, who are gradually expanding their foothold in the market. Further, Mexico’s telecom regulatory authority granted permission to cable TV and media giant, Grupo Televisa SA TV to start wireless operations in the region. However, the company is yet to take any decision in this regard. Televisa currently carries a Zacks Rank #3 (Hold). You can see the complete list of today’s Zacks #1 Rank (Strong Buy) stocks here.

Zacks just released a Special Report to guide you through a space that has already begun to transform our entire economy...

Last year, it was generating $8 billion in global revenues. By 2020, it's predicted to blast through the roof to $47 billion. Famed investor Mark Cuban says it will produce "the world's first trillionaires," but that should still leave plenty of money for those who make the right trades early. Download Report with 3 Top Tech Stocks >>