What's in the Offing for QuickLogic (QUIK) in Q4 Earnings?

QuickLogic Corporation QUIK is set to report fourth-quarter 2017 results on Feb 14. Notably, the company’s earnings have surpassed the Zacks Consensus Estimate in two of the four trailing quarters, with an average positive surprise of 9.2%.

Last quarter, the company reported adjusted loss of 4 cents per share, which was in line with the Zacks Consensus Estimate but narrower than the year-ago quarter’s loss of 6 cents per share.

Revenues of $3 million increased 6% on a year-over-year basis and also met the Zacks Consensus Estimate. Notably, Samsung accounted for 24% of total revenues compared with 21% during the previous quarter.

Management lowered guidance for fourth-quarter 2017, primarily due to Display Bridge customers trimming the fourth-quarter forecast by around $450,000 and the delay in placing order for a new wearable design by the company’s tier one smartphone customer.

Additionally, its focus on the currently licensed technology running at high volume instead of expansion of the license agreement with an existing fab partner hurt the company’s revenues in the third quarter. The trend is anticipated to continue in the fourth quarter as well.

At the mid-point of guidance, non-GAAP loss is expected to be approximately $3.3 million or 4 cents per share. The Zacks Consensus Estimates for earnings is currently pegged at a loss of 4 cents.

QuickLogic stock has gained 18.4% year over year, outperforming the 8.1% rally of the industry it belongs to. 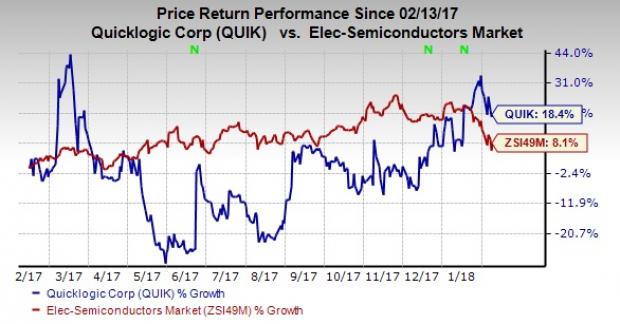 Let's see how things are shaping up for this announcement.

During the quarter, the company’s test-chip qualification for SMIC low power 40 nanometer process was completed. In order to expand presence in the Chinese market, QuickLogic signed a partnership agreement with a prominent EDA tool and semiconductor IP distributor in China named AcconSys. The latter will provide the company’s flagship ArcticPro embedded FPGA solutions with sales and support services in China. The deal is expected to act as a catalyst.

Notably, QuickLogic was granted a patent for Flexible Fusion Engine (“FFE”), which is used for always-on sensor processing in the EOS S3 multi-core processor, by the United States Patent and Trademark Office. The company’s sensor processing segment has seen rapid growth driven by its EOS S3 software on a chip (SoC), which has the capability to support always-on/always listening requirement at a very low power consumption level.

As the world is moving toward voice interfaces like Amazon’s AMZN Alexa, Apple’s Siri, Alphabet’s OK Google, the need for technology products that run on voice command is also increasing. This is leading to growing demand for this always-on feature in the mobile, wearable, hearable and battery powered IoT products industries.

This new feature is replacing the previously prevalent push-to-talk feature. The hardware architecture used for the push-to-talk feature is not considered apt for the always-on feature as it will consume more battery life. Consequently, QuickLogic’s low power consuming EOS S3 SoC with an integrated Low Power Sound Detector or LPSD is gaining wide acceptance in this scenario.

The company is witnessing increasing demand for wearable products in the B2B market, primarily driven by higher demand from hospitals and fitness focused companies, which need to track body activities and biometric information.

The smartphone market also raises optimism. It is currently working with a Japanese smartphone OEM, which is expected to adopt QuickLogic’s EOS S3 SoC for its new models scheduled to be launched in 2018.

What Our Model Says

According to the Zacks model, a company with a Zacks Rank #1 (Strong Buy), 2 (Buy) or 3 (Hold) has a good chance of beating estimates if it also has a positive Earnings ESP. The sell-rated stocks (Zacks Rank #4 or 5) are best avoided. You can uncover the best stocks to buy or sell before they’re reported with our Earnings ESP Filter.

QuickLogiccarries a Zacks Rank #3 and its Earnings ESP is 0.00%.

Here are a couple of companies which, as per our model, have the right combination of elements to post an earnings beat this quarter:

NVIDIA Corporation NVDA has an Earnings ESP of +6.87% and a Zacks Rank of 2. You can see the complete list of today’s Zacks #1 Rank stocks here.

Zacks EVP Kevin Matras believes this familiar stock has only just begun its climb to become one of the greatest investments of all time. It’s a once-in-a-generation opportunity to invest in pure genius.