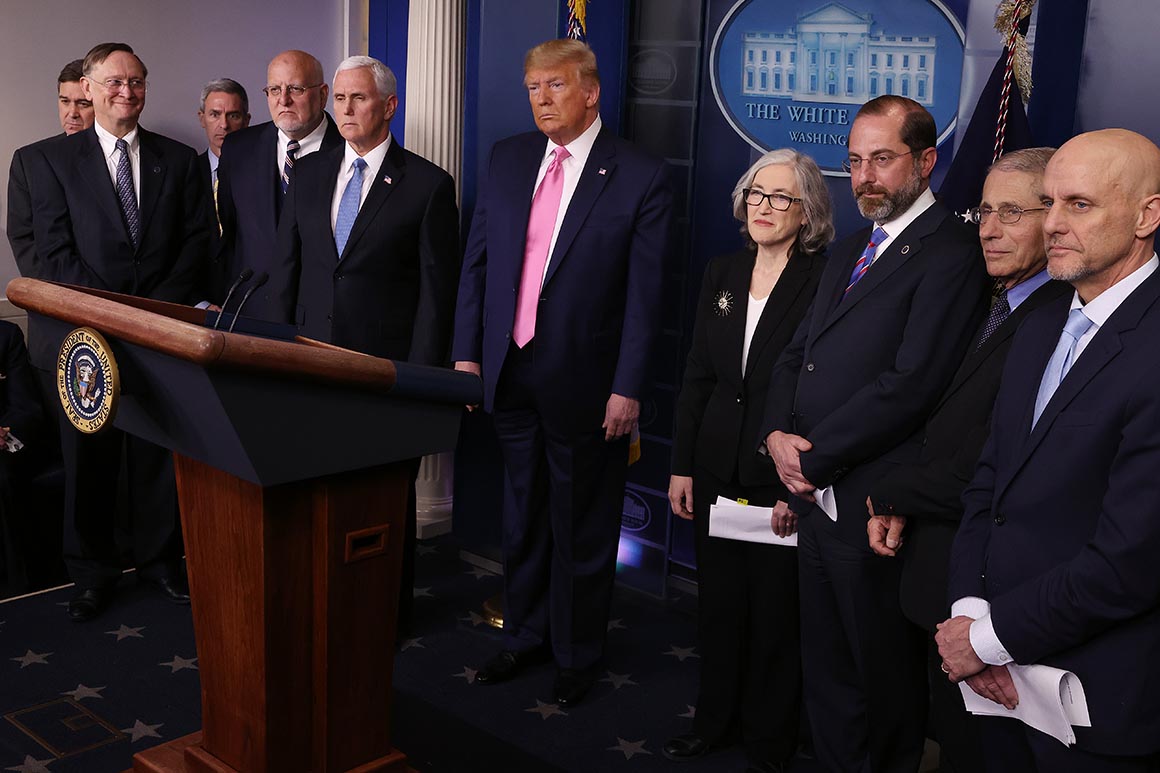 The White House has been walking into a coronavirus trap.

By pooh-poohing worries about the virus and saying everything is under control, it set itself up for the charge, if things get even a little bit bad, that it was self-deluding and overly complacent. It would be accused of making mission-accomplished statements before the mission truly began.

The administration is already getting attacked for its cuts to the epidemic teams at the National Security Council and Department of Homeland Security. If the virus spreads significantly in the U.S., it will be attributed entirely to these moves, fairly or not.

Although Trump struck a mostly better tone in his news conference after returning from his trip to India, he’s been a chief offender, wanting to downplay the virus for fear it will continue to suppress the stock market.

This is exactly the wrong approach. The moment doesn’t call for market-reassuring Trump, but threats-aren’t-getting-past-our-borders Trump, not Dow 30,000 Trump, but drawbridge-and-moat Trump.

Everything should be geared toward to overreacting now, when the threat in the U.S. is still in prospect, than later, when circumstances may be beyond anyone’s direct control.

That means appointing a point person for the coronavirus response that doesn’t already have a full-time job, like the current designee Vice President Mike Pence. The selection of a czar is a Washington cliché, and often a kind of pantomime — the main usefulness of a czar is saying you’ve appointed a czar.

In this case, a czar would be not just a symbol of seriousness, but if the right person with a medical background were selected, like former Food and Drug Administration Commissioner Scott Gottlieb, it would provide genuine expertise in public health and the workings of government, as well as being a reliable source of public information.

It means erring on the side of further travel restrictions, even if it will be impossible to exclude infected people from the United States, given the spread of the virus to so many countries and the fact that it takes time for it to sicken people.

It means not quibbling with Congress over coronavirus funding, with even Minority Leader Kevin McCarthy saying the administration’s $2.5 billion request is a “little low.”

It means making sure the CDC is working at maximum efficiency to make coronavirus tests widely available, and government agencies are doing everything possible to push the development and deployment of a vaccine.

Finally, it means coordinating with localities as warranted on ways to slow the spread of the virus via “social distancing,” or the avoidance of large gatherings and public transportation.

It is certainly true, as the president’s allies have emphasized in recent days, that the press has hyped threats that would be harmful to Trump’s political prospects, whether the overblown fears of a recession last year to the hyperbolic warnings of war with Iran after the killing of Qassem Soleimani.

The coronavirus is not a modern-day plague. Many people infected will experience only mild symptoms, and it doesn’t appear to be as deadly as SARS or Middle East respiratory syndrome.

Yet it is not a creation of the fake news, either. It has hobbled the economy and everyday life in one of the most important counties in the world, China, and is shutting down towns in Italy. It is spreading throughout the Middle East and there now are more new cases outside of China than inside it. The virus reportedly has killed nearly 3,000 people.

If it spreads in the United States, there could well be a panic that in itself would be damaging to the social fabric and the economy.

Maybe none of this comes to pass, but it’s better to be overly prepared and vigilant than it is to play catch-up.

Besides, the political valence of the coronavirus crisis should be favorable to Trump’s worldview. It demonstrates a downside of globalization. It shows the importance of borders and maintaining their integrity. It is an object lesson in our overdependence on a China that is dictatorial, dishonest and poorly governed.

The president shouldn’t shrug off the threat in the hopes of talking up the stock market. If his team responds effectively, the Dow will take care of itself.