Guide to DFA US Targeted Value I Fund (DFFVX)

FTC has cleared the pending acquisition of Airgas (ARG) by Air Liquide.

Airgas misses by $0.18, misses on revenue

Airgas (ARG) has announced the reorganization of its South distribution region

Are Airgas' (ARG) Efforts Good Enough to Beat the Odds?

It's been 25 years since Professor Jeffrey Sonnenfeld's landmark book The Hero's Farewell vividly documented the challenges and failures of CEO succession planning at large publicly traded companies, and not much has changed beyond the exponential growth in what the top executives get paid. A typical view was expressed by a CEO interviewed for a report chaired by Sonnenfeld for the National Association of Corporate Directors a few years after the book came out. When asked for his thought on finding a successor, the CEO "joked" that he was going to try to find the geneticist who figured out how to clone Dolly the Sheep so that he could stay in charge forever. The NACD report urged boards to take control of succession planning, but too often boards still defer to the CEO on succession planning as they do on compensation, acquisitions, strategy and board membership itself. That last is the reason that even capable, accomplished executives tend to relinquish authority to the CEO who appoints, informs, and compensates them. My friend and colleague Annalisa Barrett, who teaches at the University of San Diego School of Business, has produced a new study for the Investor Responsibility Research Center Institute that documents the cost to investors of inadequate disclosures about succession planning. Companies with successful chief executive officer (CEO) transitions were far more likely to have provided shareowners with more disclosure about their CEO succession plans, according to a new study released today by the Investor Responsibility Research Center Institute (IRRCi). Unfortunately, that is not usually the case, as the report also found that nearly a quarter of companies that changed CEOs in 2012 did not disclose anything about succession planning in the three years prior to the change. Moreover, the disclosures that were made were often inadequate, failing to even mention basic information such as which board committee is responsible for succession planning. This data only reinforces shareholder concerns about whether directors are devoting the necessary attention and resources to finding the next CEO. Succession planning should be a perpetual agenda item to make sure that the company is prepared for both expected and unexpected transitions at the top. The best way to make sure that executives devote adequate resources and attention to succession planning is to pay them for it, including incentive compensation for attracting and retaining top talent to make sure that internal candidates are available. Longtime activist fund Relational Investors identified succession planning as one of the three most common causes of financial underperformance, and suggested the inclusion of succession planning as a consideration when it comes to compensation decisions and to disclose this information to shareholders. And a Blue Ribbon Commission report on the Compensation Committee published by the National Association of Corporate Directors in 2015 suggests that "pay plans ...[should] reward executives for promoting the development of talent internally." We can encourage boards to focus more consistently and independently on succession planning by tying their own compensation to the results, perhaps by requiring them to hold onto their stock for five years after leaving the board. Some companies have incorporated succession planning into their executive incentive compensation programs, though most only temporarily during periods of transition. Barrett's IRRCI study included examples: • Airgas Inc. provided its Chairman and CEO a discretionary bonus in 2012 for "working with the Committee and the Board to implement the succession plan that positions Airgas for the future." The company positioned itself for the future by selling itself to France's Air Liquide. • FBL Financial Group Inc. awarded its interim CEO a performance-based restricted stock award, which included a goal of "codifying a succession planning framework." Then it was dropped. • Hanger Inc. included an individual goal of "executive progression and succession transition activities" for its retiring CEO, but once he was replaced it disappeared. • Legg Mason Inc. incorporated the "enhancement of the] company's management succession planning and strategic planning processes" as a performance measure for the CEO's incentive award, and then omitted it in a subsequent filing. • Louisiana-Pacific Corp. included the following in its list of individual goals incentive purposes for the CEO: "Lead the efforts for succession planning for all senior management positions to ensure that plans are in place to meet both short-term and long-term goals of the organization" and did keep succession in the next year's disclosure. • McDonalds Corp. had an individual performance factor in its incentive plan for its CEO, stating that it "includes a robust succession planning process, which focuses on ensuring that McDonald's has the right leadership talent to drive success today and tomorrow." The 2015 proxy does not include a discussion of succession planning. They have increased their disclosure regarding the CEO succession planning process, but it is not addressed in the incentive plan.   More companies should follow the example of eBay. In their 2015 proxy, eBay discussed succession planning in detail, especially in regard to the PayPal spinoff. When "making decisions regarding the amount and form of each element of compensation for each of our executive officers, the [Compensation] Committee takes into account the size and complexity of the executive officer's job and business unit or function, including the following: ●The Company's overall financial performance ●Performance versus other goals, such as defining corporate and business unit strategy and executing against it ●Supporting the business units in the achievement of their goals ●Leadership ●Improving and supporting innovation and execution at the Company ●Hiring, developing, and retaining the senior leadership team ●Planning for succession ●Investing in technology and key talent ●Driving gender diversity as a priority for the Company Boards who adopt and follow through with these goals will make their companies stronger. They will earn the confidence of their shareholders -- and, as Barrett's study shows, make more money for them, too. -- This feed and its contents are the property of The Huffington Post, and use is subject to our terms. It may be used for personal consumption, but may not be distributed on a website.

Airgas delivered earnings of $1.19 per share in the third quarter of fiscal 2016, beating the Zacks Consensus Estimate of $1.18.

Airgas' (ARG) Q3 Earnings: Will it Beat or Miss Estimates?

Airgas, Inc. (ARG) is slated to report third-quarter fiscal 2016 results before the market opens on Jan 28.

Air Products says it will not pursue move to buy Airgas

Airgas downgraded to underperform from market perform at Raymond James

Airgas, Inc. (ARG) is being acquired by Air Liquide for $143 per share in cash, or a total enterprise value of $13.4 billion. 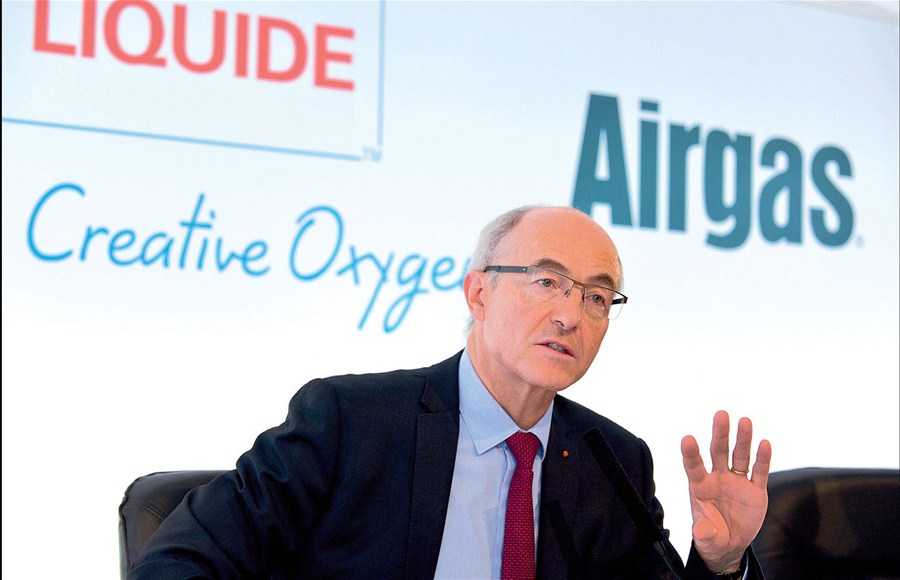 Air Liquide buys Airgas for US$ 13.4b