ABX vs. NEM: Which Is the Better Gold Stock Ahead of Earnings?

With Barrick scheduled to report on Feb 14 and Newmont reporting on Feb 22, its a good time to consider which is a better stock.

How to Trade Gold Rally With ETFs & Stocks

A weak dollar environment has been driving the gold price higher.

Not long after South Africa introduced legislation calling for the redistribution of white-owned land and business to the country's black population, in a redux of the catalyst that resulted in Zimbabwe's hyperinflation at the start of the century, on Thursday South Africa doubled down when it announced plans to revise its mining charter and introduce rules requiring all local mines be 30% black-owned, regardless of whether they have previously sold shares or assets to black investors that later divested.  Mining stocks promptly tumbled on the news, with shares in Anglo American sliding 5% after the announced mining regulation changes; AngloGold and Kumba also fell 5 percent in Johannesburg, while Sibanye traded 6.5% lower. The charter revision comes shortly after Africa’s most industrialised economy entered its first recession since 2009, with investor confidence already shaken by infighting within the ANC over the scandal-hit presidency of Jacob Zuma. The proposal was unveiled by the Department of Mineral Resources which said it intends to raise the minimum black-ownership level from the current 26% to ensure more proceeds from the country’s natural resources flow to the black majority, Mining Minister Mosebenzi Zwane told reporters on Thursday in Pretoria. The charter will also require companies to pay 1% of annual revenue to communities and new prospecting rights will require black control, Zwane said. “The mining sector does not exist in a vacuum,” Zwane said as he unveiled the charter on Thursday. South African miners needed “strong legislative regimes” to thrive, he added. “We have listened to miners who have not seen real economic benefit; people who don’t see benefit of transformation structures,” he said. Some more details from Bloomberg: A holder who claims a historical transaction that achieved 26 percent prior to the new Mining Charter, which Zwane presented on Thursday, “must top up to 30 percent within 12 months,” regardless of whether the earlier black shareholders still hold their position, according to a statement handed to reporters According to Bloomberg, most mining companies reached the 26% level under previous versions of the mining charter but many black investors have since sold out. The Chamber of Mines, which represents mining companies, has said it’s willing to fight the government in court over the issue of getting credit from earlier deals, which it says would kill investment in the industry. Glencore Plc, Impala Platinum Holdings Ltd., South32 Ltd. and Kumba Iron Ore Ltd., which is majority owned by Anglo, would need to sell the biggest stakes if the new charter fails to give credit for previous deals, Avior Capital Markets (Pty) Ltd. said June 1. AngloGold Ashanti Ltd. and Sibanye Gold Ltd., the country’s two biggest gold miners, may also be affected by the new rules. As the FT adds, President Zuma has called for “radical economic transformation” to more fairly share the benefits of South Africa’s economy among the black majority. Zwane, a close ally of embattled president Zuma, said the government was “not blind” to the downturn but added that “there’s a need to produce a new era of industrialisation driven by young economic champions,” referring to the charter as a “revolutionary tool”. Miners who rely on international supply chains to operate in South Africa may be hard hit by rules that require companies to procure 80 per cent of services and 70 per cent of goods from black-owned local suppliers.   In addition, the holder of a South African mining right will be forced to pay 1 per cent of its annual turnover to communities. Confirming that this is the latest disastrous populist policy adopted by South Africa, the rand promptly tumbled on the news.

Will the Gold Industry Reel Under Headwinds?

Will the Gold Industry Reel Under Headwinds? 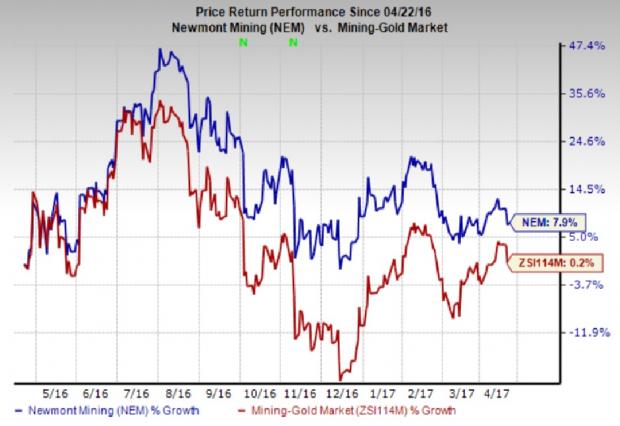 Newmont (NEM) to Report Q1 Earnings: A Beat in the Cards?

Newmont (NEM) is scheduled to report first-quarter 2017 results after the closing bell on Apr 24.

Newmont (NEM) to Report Q4 Earnings: What's in the Cards?

Uncertainty over the policies of President Trump and political concerns in Europe are pushing up the prices of gold.

Should You Steer Clear of Gold Stocks?

Should You Steer Clear of Gold Stocks?