Shares fall from high in 2 years

SHANGHAI stocks dropped from their highest in nearly two years today amid profit taking in financial and consumer shares. The Shanghai Composite Index shed 0.99 percent to close at 3,523 points. Liquor 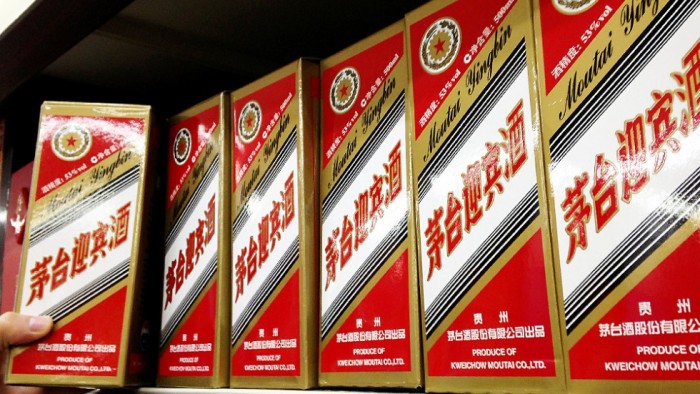 Shares rise on boost from distilleries 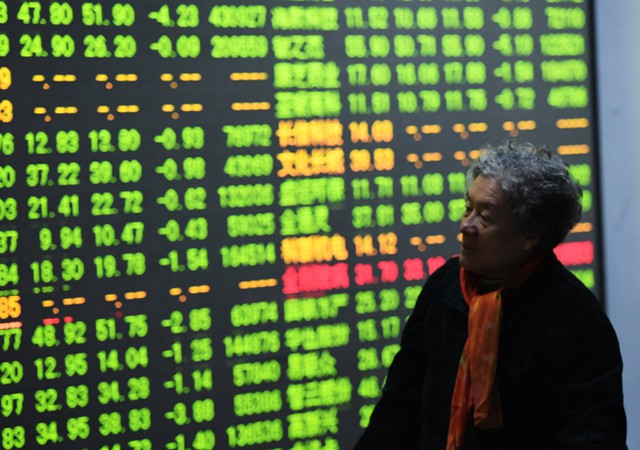 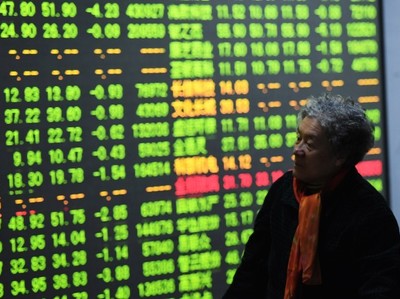 The incredible run in China stocks eased somewhat last week as a combination of factors including tightening liquidity and jitters over bond markets led to steep sell-off in the large-cap shares. 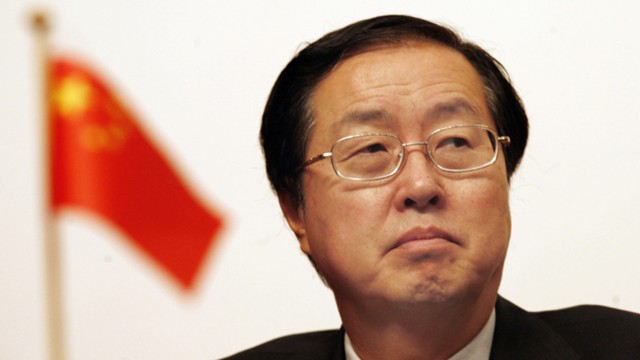 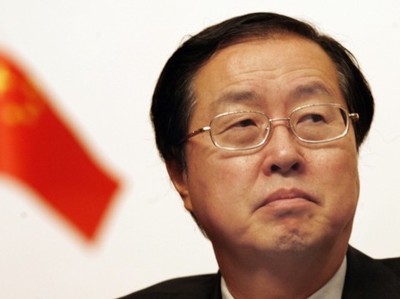 The euphoria from the year-end melt up in Europe and the US failed to inspire Chinese traders, and overnight China markets suffered sharp losses, with the Shanghai Composite plunging 2.3%, its biggest one day drop since June 2016, over growing fears that the local bond rout is getting out of control. Both the tech-heavy Chinext and the blue chip CSI 300 Index dropped over 3%, as the sharp selloff accelerated in the last hour, as Beijing's "national team" plunge protection buyers failing to make an appearance. There were sixteen decliners for every one advancing share. In addition to tech, consumer non-cyclical and health-care sectors, the hardest hit names were banks such as ICBC, Ping An Insurance and Kweichow Moutai. Over in Hong Kong, the Hang Seng Index slid 1 percent from a decade-high, one day after closing above 30,000. Confirming our report from last week, that traders were stunned by an official warning from Beijing that some stocks - in this case Kweichow Moutai, one of the most popular stocks among investors  - had risen "too far, too fast", Ken Peng, strategist at Citi private bank, told CNBC Thursday that over the weekend he had heard views about particular Chinese stocks having moved too fast. He also said that Thursday's downward move was impacted by "relative tight liquidity conditions in financial markets overall, because of a more stringent liquidity policy by the central bank." "The decline in Moutai has triggered selloffs in some of this year’s best performing stocks," said Zhengyang Shen, Shanghai-based analyst at Northeast Securities. "When those giant stocks fall, retail investors will follow to sell their holdings. The ChiNext stocks do not have much support from the national team, so they fell even more," he said, referring to state-backed funds. As Bloomberg adds, today’s tumble was especially jarring given this year’s relative placidity in the stock market - the world’s second-largest. Volatility on the Shanghai Composite Index fell to the lowest level in decades earlier this month amid signs the government was curbing speculation in the wake of 2015’s $5 trillion rout. For Dickie Wong, executive director of research at Kingston Securities Ltd. in Hong Kong, it’s too soon to talk about panic selling. At the same time, just days after we warned that "A "New Era" In Chinese Regulation Means Turmoil For $15 Trillion In China's "Shadows", yields on sovereign debt and top-rated local corporate notes climbed to the highest level in three years as China's deleveraging campaign accelerated (don't worry, it will stop the moment one or more corp or sov issues go bidless). As Bloomberg adds, with more than $1 trillion of local bonds maturing in 2018-19, it will become increasingly expensive for Chinese companies to roll over financing. "Cash is king now on the mainland," Castor Pang, head of research at Core-Pacific Yamaichi HK told Bloomberg. "Rising bond yields will be negative for corporate profits, since it will increase financing costs. That’s very bad news for the stock market." Meanwhile, the yield on 10-year sovereign bonds rose above 4% on Wednesday, while yields on five-year top-rated local corporate notes have jumped about 33 basis points this month to a three-year high of 5.3 percent, according to data compiled by clearing house ChinaBond. That said, selling eased a little in the nation’s sovereign debt market on Thursday. The 10-year yield fell two basis points to 4.02%, after climbing 39 basis points this month, although the yield on five-year bonds rose three basis points to 4.04%. Not even the PBOC's generous 100Bn yuan net liquidity injection helped ease liquidity and deleveraging nerves. There was some good news, if only in terms of narratives: "You can say this is a correction but I don’t think it’s a market meltdown," Wong said. "Market sentiment is still okay but after recent gains it’s time to pull back." "The plunge in China’s bond market is driving mainland stocks lower, especially financial-related shares," said Steven Leung, executive director at UOB Kay Hian (Hong Kong) Ltd. "Most A-share investors believe there will be further tightening in financial markets. Investor sentiment has been quite cautious in China, even though Hong Kong kept hitting 10-year high. There’s a lack of further momentum to move up."

Overnight we highlighted that despite a massive weekly net liquidity injection by the PBOC (which ended on Friday when the PBOC drained a net 10bn in liquidity) Chinese stocks failed to hold on to Thursday's gains, and resumed their slump...   ... headed for their worst week in 7 months.   However, it was more than the simply a question of liquidity flows, because it once again appears that Beijing is involved in micromanaging daily stock moves, only unlike the summer of 2015 when China blew a huge stock bubble in a few months, which then promptly burst leaving China scrambling for the next year to figure out how to avoid contagion, this time Xinhua had a different message: sell. According to Bloomberg, the reason why Chinese stocks - led by Shenzhen shares - slumped on Friday, is due to a warning by state media that one of the nation’s hottest stocks was climbing too fast, which in turn triggered a selloff. And while the SHCOMP closed down 0.5%, the Shenzhen Composite Index closed down more than 2%, with liquor makers and technology companies that had outperformed this year among the biggest losers. The catalyst that sparked the selloff? China's biggest liquor maker, Kweichow Moutai, which plunged 3.9% - after tumbling as much as 5.8%, its largest decline since August 2015 - after Xinhua News Agency said its China’s biggest "should rise at a slower pace." Other liquor makers fell in sympathy, Wuliangye Yibin slid as much as 5.3% in Shenzhen, the most since July 2016, and Luzhou Laojiao fell 4.7%, although the stocks, which have more than doubled this year, pared their losses by the close. In commentary published in the state-owned newspaper, the author said "short-term speculation in Kweichow Moutai shares will hurt value investing and long-term investment will deliver best returns." The bizarre and unusual critique - traditionally China's media mouthpieces have only urged stocks to go higher, never lower - capped a week that saw a rout in Chinese sovereign bonds spill into the equity market amid concern about a government deleveraging campaign and faster inflation. For the week, the Shenzhen gauge fell 4.2%, its worst loss since May 2016. The Shanghai benchmark declined 1.5 per cent. “The Xinhua warning was the last straw,” said Ken Chen, a Shanghai-based analyst with KGI Securities Co. “Expectations of worsening liquidity conditions are also hurting stocks.” In retrospect, perhaps the Xinhua warning was not so strange: after China's debt-fueled stock market bubble burst in 2015, wiping out $5 trillion of value, Chinese policy makers have acted to restrain excessive speculation in equities. “Xinhua is concerned that a runaway rally in a heavyweight like Kweichow will hamper the stability of the overall market,” said Hao Hong, chief strategist at Bocom International Holding Co in Hong Kong. And while one can wonder why China is suddenly so concerned about even the hint of potential vol spike in the stock market - suggesting that even a modest selloff could have dramatic consequences for the Chinese financial sector - it is certainly strange that whereas even China is acting to restrain the euphoria of its citizens over fears of what happens during the next bubble, in other "developed" countries, the local central bankers, politicians and TV pundits have no problem in forcing retail investors to go all risk assets when the market is at all time highs. As for China, it will have truly gone a full "180", if in a few months time instead of arresting sellers as it did in the summer of 2015, Beijing throw stock buyers in prison next.

Beijing should let investors decide when they have had enough

Get Ready For A Baijiu Martini: The Chinese Moonshine That Packs A Punch

A 5,000-year-old Chinese alcohol is in the process of being gentrified. Domestic players like Kweichow Moutai laid out ambitious plans to export the indigenous spirit overseas. And what was once the world's largest liquor maker, Diageo wants consumers to try the Chinese moonshine in cocktails. The World’s Fastest Growing Brands in 2017, by Value

Which brands are winning the hearts of consumers the quickest? Today's charts look at trends in brand value, showing the fastest growing brands globally. The post The World’s Fastest Growing Brands in 2017, by Value appeared first on Visual Capitalist.

SHARES rose for a fifth day yesterday, pushing the benchmark index to the highest level since December 2015, as investors were buoyed by consumer firms and steel makers. The Shanghai Composite Index