The Cart In Front Of The Horse: Are Gold Miners Actually Leading The Spot Price?

The Wall Street Journal published an article this morning that could be putting the cart a bit in front of the horse, suggesting that poor performance in gold miners could drag the spot price of the commodity lower, despite the fact that gold has outperformed the S&P 500 year to date by a factor of 1.4% to -2.6%. The Journal suggests that with bond yields on the rise, investors are going to be more likely to allocate capital to treasuries instead of gold, reporting: Higher interest rates tend to buoy Treasury yields and make gold less attractive by comparison. The dollar has also been rebounding, which has cooled some optimism for gold bugs, analysts said. A stronger dollar makes commodities denominated in the currency more expensive for overseas buyers. Gold miners have underperformed despite a strong fourth-quarter earnings season and upbeat 2018 projections. One reason is that some of the companies still aren’t generating as much cash as miners of other metals such as copper, analysts said. What’s the journal doesn’t mention is the major difference between gold miners in the spot price of gold: namely the fact that miners are companies with staff, management, administrative expenses and other variables that have nothing to do with whether or not the spot price of gold is usually bid or not. The assertion that miners are going to lead the price of gold lower versus looking at miners within a potential positive light due to the fact that they could actually be argued to be “underperforming“ the spot price of gold due to this price divergence may leave some of us scratching our heads. The article goes on to note that several miners have actually exceeded their targets for this year due to the spot price of gold but that a key metric in free cash flow relative to market value continues to lag: In 2017, gold prices had their best year since 2010, allowing many miners to repair their balance sheets. Barrick Gold, the world’s largest producer, said it paid down $1.5 billion in debt, exceeding its target, while Newmont Mining Corp. reported an 8% rise in production from a year earlier. But the companies still haven’t caught up in free cash flow relative to market value, a commonly-used metric for evaluating performance, according to Citigroup research. It isn’t unreasonable to think that gold may still lead the price of these miners going forward and that this divergence is simply an aberration that may actually signal a buying opportunity versus coming in in a decline in the price of spot gold. No macroeconomic data has come more into focus over the last couple of months than the CPI number, as inflation continues to be the key metric watched by “economists“ as the bull market reaches its peak and stock market volatility has been undoubtedly on the rise. Given that gold is not only a traditional hedge against volatility and "the system", but also a hedge against inflation itself, it is more likely that the Wall Street Journal has the cart in front of the horse in this case.

Benchmarks closed mixed on Thursday with both the S&P 500 and Nasdaq ending in negative territory, even as the Dow finished in the green

Newmont (NEM) is likely to benefit from its efforts to reduce debt and continued investments in growth projects in a rising production cost environment.

Is Pain in Store for Gold Mining ETFs on Muted Earnings?

Key gold miners came up with not-so-enthusiastic earnings reports for the fourth quarter. How did ETFs behave?

Newmont's (NEM) fourth-quarter earnings match estimates. For 2018, the company expects to produce gold in the range of 4.9-5.4 million ounces.

Newmont (NEM) posted adjusted earnings of 40 cents per share for the fourth quarter, which came in line with the Zacks Consensus Estimate.

What's in the Cards for Newmont (NEM) This Earnings Season?

Newmont (NEM) is likely to benefit from strong performance in its North American operations in Q4.

ABX vs. NEM: Which Is the Better Gold Stock Ahead of Earnings?

With Barrick scheduled to report on Feb 14 and Newmont reporting on Feb 22, its a good time to consider which is a better stock.

What's in Store for Yamana Gold (AUY) This Earnings Season? 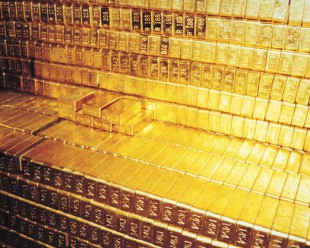